While Scuba Diving in the Riviera Maya, You Will Encounter These Shark Species

The Riviera Maya is famous worldwide for its spectacular white sand coastline that stretches from North to South for almost 80 miles. This natural and cultural paradise that boasts cenotes and extensive cave system which make is suitable for scuba diving in Riviera Maya. 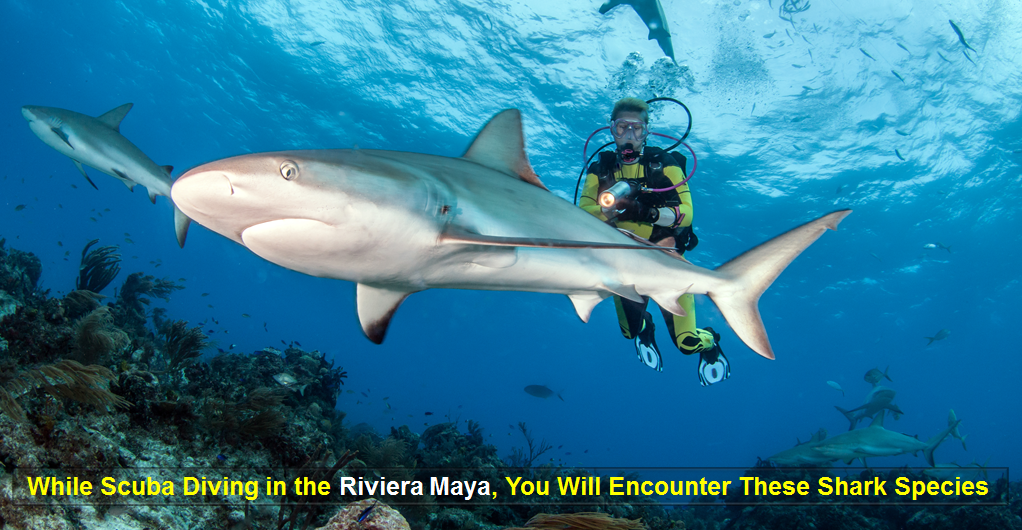 The incomparably beauty of the Caribbean Sea is what makes it a popular tourist destination amongst savvy travelers. If you love diving, look no further, because Riviera Maya scuba diving is a much-admired activity which will give you memories to cherish until your next Riviera Maya vacation. If you’re feeling more adventurous, you can even book Riviera Maya scuba yacht charter to look for the different shark species.

CARIBBEAN REEF SHARK – The most commonly spotted shark in the Caribbean islands. It is usually 6.5-8 feet long. They have dusky colored fins that do not have any prominent markings. They are dark grey or grey-brown in color on the top of the body and white or white-yellow underneath. Their flanks have an inconspicuous white band. This shark has a short, broad, rounded snout, large eyes, and pectoral fins. In total they have 5 gill slits. These sharks are normally quite shy and do not bother divers.

BLACKTIP REEF SHARK – These are the second most commonly spotted shark in the Caribbean islands. Like their friends, the Caribbean Reef shark, they are quite timid. They can be easily recognized by the black tip or edge of their pelvic, dorsal, pectoral or caudal fins. Usually, they swim around in groups which comprise of both juveniles and adults. The Blacktip shark is usually found in more shallow waters where they patrol around reef ledges and sandy bottoms. It is often spotted by divers and snorkelers.

TIGER SHARKS – This large shark is capable of growing to a length of over 16 feet. The Tiger Shark can be spotted in the Caribbean and other warm waters around the world. They are blue to light green in color, combined with a white or light yellow belly. The most known fact about tiger shark is that she eats everything. She feeds on turtles, other sharks and even young whales. Always look for sharks which have the wedge-shaped head, small pits on the snout, long fins, and a high back.

NURSE SHARK – The bottom-dwelling sharks are usually spotted in the subtropical and tropical waters, including the Caribbean. They can grow up to a length of 14 foot or 4.3 meters and can weigh a whopping 330kg when fully grown. Most of the time, they feed on crustaceans which they suck in via their mouth. The nurse shark is a night hunter which is why they can be found resting during the daytime. To spot a nurse shark while scuba diving or even when snorkeling, you will have to look under ledges and crevices on the reef.

BULL SHARK – The bull shark popularly known as Zambezi shark and is not so popular due to its attacks on humans. They can be usually be spotted in coastal areas and even in (fresh water) rivers. It can grow up to a length of 12ft and can weigh 500 lbs. The shark has derived its name from its flat snout and its unpredictable behavior. You can also travel to Playa Del Carmen if you want to encounter the bull shark. Because Playa Del Carmen is the breeding ground of the female bulls. It is highly recommended not to feed these marine creatures.

Riviera Maya scuba diving will definitely allow you to enjoy and share the waters with these majestic creatures. While scuba diving in the Riviera Maya under the guidance of an expert, witness these magnificent creatures in their natural habitat. Sharks are considered to be a very friendly creature.

View all posts by: admin

Speaking on behalf of Yachts Cancun Luxury Charters, we are happy that you have decided to contact us. here!